SALEH BARAKAT GALLERY would like to invite you to the opening of: Azza Abo Rebieh - Yearning 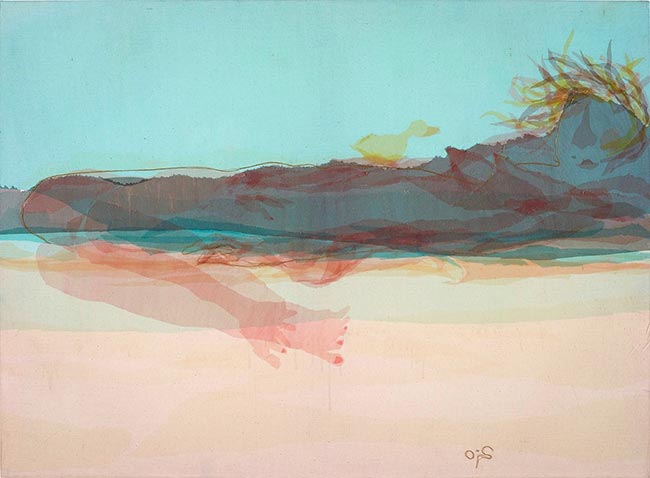 Saleh Barakat Gallery invites you to the opening of Azza Abo Rebieh’s exhibition “ Yearning" on Friday, June 3 2022 5:00-8:00pm in participation with composer and sound designer Khaled Omran and mixing by Tarek Khuluki, with guest artist Nelsy Massoud exhibiting her installation Metamorphosis at The Upper Gallery.

Yearning embodies the conflict being navigating in time and space. In perpetual motion, one comes to be through constant phenomenological transformations. In her multi-media exhibited works, Azza Abo Rebieh deconstructs the struggles of the being, “that is the rhythm of the flutter of her wings give and take, make the path of her movements like a heartbeat and its eagerness, yearning, thirsty, to do everything and nothing…” Through her words and works of art, Abo Rebieh dismantles and reconnects the parts of one’s being. In this current exhibition, Abo Rebieh puts on display a myriad of sketches, prints, paintings and watercolor, unveiling the transformability of the body by means of artistic endeavours. The Yearning exhibition is also the host of Nelsy Massoud’s sculpture titled Metamorphosis which will be exhibited at The Upper Gallery at Saleh Barakat Gallery, ground floor.

In Metamorphosis, invited artist Nelsy Massoud expands on the transformative aspect of the being. Existence is performative and metamorphic, entailing a constant assertion of the being through the mutability of the self. Similarly, “caterpillars turn into butterflies,” or when “materials take new forms,” the structural loofahs bare new life forms.

Azza Abo Rebieh (Syria, b.1980) obtained her degree in printmaking from the Faculty of Arts and Sciences at Damascus University in 2002. Primarily interested in etching and engraving, Abo Rebieh extends her work to an array of other media and materials, including watercolors, threads, and tulle on canvas, Ink painting, and printing on leather. She has won three awards and participated in more than fifteen group exhibitions. In 2018 and 2019, Abo Rebieh held her first solo exhibitions at 392 Rmeil, managed and curated by Nelsy Massoud. Her works “The Boot,” “Accused of Homosexuality,” and “Still Singing” became part of the British Museum collection in 2014. Following an online art residency organized by Coculture and Ettijahat & Martin Roth Initiative, Germany (2021), an art residency for one month under Artist Protection Fund fellow in the Bogliasco Foundation, Italy (2020), and the last residency of four months under Artist Protection Fund fellow in the American Academy in Rome, Italy (2019-2020), Abo Rebieh returns to Beirut with her show Yearning (2022) at the Saleh Barakat Gallery.

Nelsy Massoud (Lebanon, b.1957), first moved to Ivory Coast for four years before residing in New York for 23 years, where she learned glass mosaic and became the assistant of a master mosaicist Val. After a few open house exhibitions in New York, Massoud moved to Montreal, where she opened a gallery and workshop of mosaic for students, before coming back to Beirut in 20005. For five years, she was a manager and curator at 392 Rmeil 393 gallery in Beirut. In her exploration of various media, such as sand, polythene or glass, Massoud found a particular interest in the intertwining of light and colors in loofahs.