Nothing is Certain, Everything is Melting, and that’s Okay

Ayyam Gallery is pleased to present Nothing is Certain, Everything is Melting, and that’s Okay, a solo exhibition featuring Athier's latest body of work.

Please join us in the presence of the artist at the opening reception on 20 January from 7 - 9 pm. 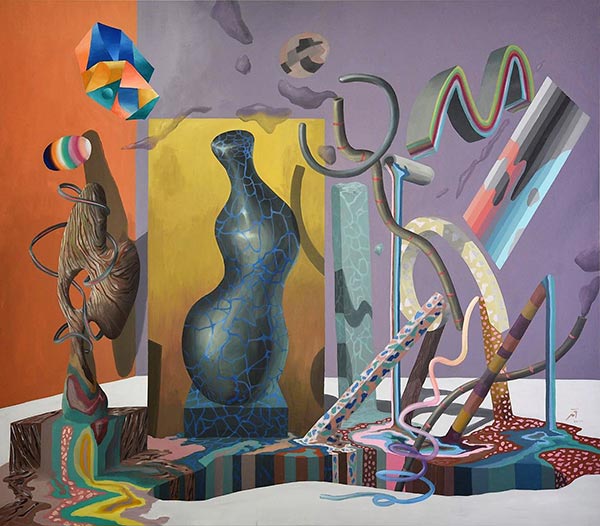 In a departure from the geometric forms and bold colors that have become a trademark of the British Iraqi painter, this current series created in and of his studio in an industrial suburb of Paris, explore the changing state between order and disorder: attempting to capture compositions that balance and eventually melt harmoniously in their state of transition. This shift can be seen as Athier’s expression of surrender towards uncertainty. The new works incorporate a play between the real and the surreal, the two-dimensional, and the three dimensional. Making color and light subjects as well as aesthetic devices.

Nothing is Certain, Everything is Melting, and that’s Okay, explores space through carefully curated compositions in which Athier places geometric blocks, marble slabs and rubble, squiggles, foam, plastic toys, curvilinear objects and patterned forms in a milieu he’s partially designed and partially imagined. Marble melts into plastic, which melts into water, which melts into metal: There is no hierarchy of form. These objects exist in a world that has no mass or gravity, a world that is light in restrictions. Similar to the previous body of work, the artist introduces three-dimensional elevations. Within these scenes, Athier uses old photos of Jean Arp sculptures, as yet another tool to challenge the viewer to redefine what has form and what is flat. This show features a number of works from an earlier series called All Things Come Apart, which can be seen as a prelude to the current paintings. Uncertainty, balance and light have become increasingly instrumental in the artist’s depiction of space.

Athier’s compositions weave contemporary forms with layers of nostalgia: Influenced heavily by the Memphis movement of the 1980’s, the early Italian surrealists and the muted colors and simple forms of early 3D computer graphics. And much like the early surrealists, the artist maintains a meticulous dedication to believability, using as many perspective rules as he can within the scenes he creates, before pulling gravity away and watching them crumble. All these objects seem to melt into the unknown, portraying a sense of dreamlike uncertainty. And that’s okay.

Athier’s work has centered on posing unanswerable questions against undefined answers, forming a visual narrative between the two. Creating works that, from a distance, seem to be simply aesthetically pleasing compositions, up close the works are riddled with symbolism and visual references. Placing high emphasis on three-dimensional elements in his work, the artist depicts his homeland, Iraq, his diasporic relationship to his foreign homeland, as well as the concept of nostalgic referencing in how we idolize and remember our past, present, and future.

Of the main constructs used in Athier’s painting, the initial response is that of scale and color, which guide the viewer through his multidimensional compositions. Immersing the viewer with layer upon layer of symbolism in these large-scale paintings, the artist manages to find the middle ground between fluid organic forms and hard-edge geometric shapes.

Separate to his artistic practice, Athier has worked extensively as an educator in the United Kingdom and abroad. For three consecutive years, beginning in 2007, Athier worked as a British Museum Arab Artist in Residence, working in schools throughout the UK. In 2011, he was selected to serve as the Chasing Mirrors Artist in Residence at the National Portrait Gallery, leading workshops in community centers across London. Athier has also worked in a number of refugee camps as a workshop leader in Lebanon, Turkey, and Jordan, and in 2014 was invited by the Palestinian Museum as a Visiting Artist to conduct workshops with children in the West Bank. In 2015, he was selected to work at the artist-run interdisciplinary space Beirut Art Residency.

Born in 1982, Athier lives and works between Paris, London, and Istanbul, and holds a graduate degree in Communication Design with Illustration from Central Saint Martins, UK.

Founded in 2006, Ayyam Gallery is a leading arts organization that manages the careers of diverse established and emerging artists. Blue-chip art space in Dubai, a series of collaborative projects in the United States, Europe, Africa, and Asia, and a multinational non-profit arts program have furthered the gallery’s mandate of expanding the parameters of international art. With its widely respected multilingual publishing division and a custodianship program that manages the estates of pioneering artists, Ayyam Gallery has also contributed to recent efforts that document underrepresented facets of global art history.