Agial Art Gallery would like to invite you to the opening of: Anas Albraehe - MOTHERLAND 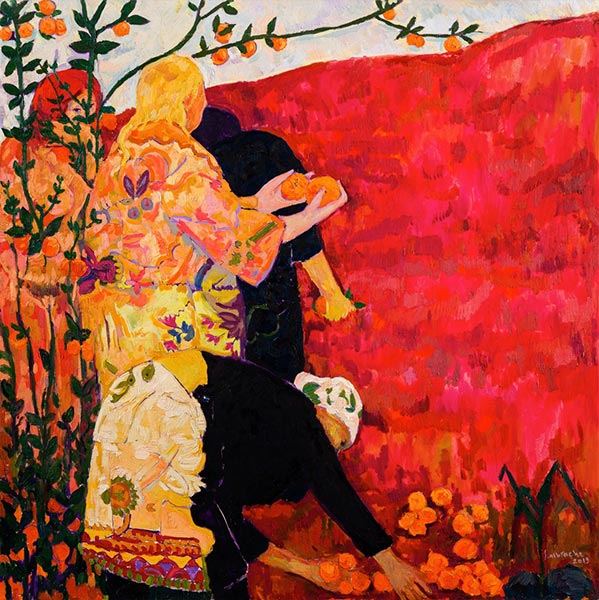 Anas Albraehe’s recent painting practice has primarily revolved around representations of workers in their everyday lives, whether in their meager moments of leisure, or hard at work. His last exhibition focused on Syrian manual laborers, with whom he was familiar, caught in spells of deep sleep. After frequent trips to the rural village of Soueida in Syria, where he is from, he has returned with a new body of work that depicts the persistence of manual labor, largely carried out by women, in the aftermath of the scorching of Syrian lands in the past decade marked by a colossal war. Lusciously colorful, large-scale, and yet intricately detailed, Albraehe’s recent oil paintings and monotype sketches bear the same radiance and intimacy of his previous series of work.

Born in Syria in 1991, Anas Albraehe is a Beirut-based artist who primarily works in painting and theatre performance. He received a bachelor’s degree in painting and drawing in 2014 from the Fine Arts University of Damascus, Syria. After the onset of war in Syria, he relocated to Lebanon and obtained an MA in Psychology and Art Therapy from the Lebanese University in 2015. Albraehe’s solo exhibitions include The Dream Catcher at Agial Art Gallery in Lebanon (2018), and Manal, which was held respectively in Artspace Hamra in Lebanon and in Wadi Finan in Jordan, in 2017. He has also participated in several group exhibitions, including the Middle East Institute Gallery in Washington DC, USA (2019); Capkuwait Gallery, organized by Selections Magazine in Kuwait (2018); Artspace Hamra in Lebanon (2016); and Albareh Galerry in Bahrain (2015). In 2016-2017, Albraehe participated in SAFIR TA’AROF 2017, an artist workshop as part of the Sharjah Art Biennial.

Agial Art Gallery, established in Beirut in 1990, is one of the leading destinations for modern & contemporary art from Lebanon and the Arab world.