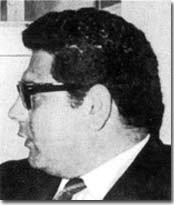 Fifty years of experience of the artist Toufic Abdul-Al; resulted in hundreds of oil, and watercolor paintings, besides works of sculpture, lineation and poetry cannot be easily categorized. This unusual experience, though there was no identification between his artistic shifts and the concept of the “phase” or “school” in modern European art, his journey was nothing but a search for the artistic ego, for individuality, method, and for the characteristics of the art of Toufic Abdul-Al himself.
Throughout his long exhausted difficult journey, the artistic reality always presented its crisis under two main titles:

• The recent emergence of the Palestinian plastic art and the absence of the link between the artist, and his artistic history inheritance
• The weakness of the prevailing stylistic currents which attempted to reach cohesion between the conditions of the creative work of art and its struggle conditions due to the continuing conflict in the Middle East.
This is explaining why experimentalism was the dominant style in the Palestinian plastic art, and the memory of the negated basic environment kept on embracing the tools of work until they were later changed by the revolutionary reality, its tools and concerns.
Along the experience of Toufic Abdul-Al, was really unique. His experience, covering the paintings included in the book and the artistic inheritance since the Canaanites. Reached their utmost in the field of naturalist arts whereas very often the skill of the artist added more beauty to the foreign patterns which were usually imitated, and the artist found a wider space for his imagination.

Toufic Abdul-Al was born in Acre October 3, 1938. His father was a wholesale and retail grain and butter dealer. Palestine at the time was staying in a rebellion state, revolutionists were the masters of the situation and people had to choose between blood or money. In order to preserve his trade, his father made the second choice.

The house he lived in was situated in the Al-Mahadla suburb. It was an old three storey house with ornamented ceiling and an ivory staircase overlooking the sea. On the third storey, there were high copper beds. In the house there were arches, old windows and ornamented red brick tiles on the roof, all this given him a background influenced greatly by eastern decoration.

He used to skip school except for the art lessons and sport. So his relationship with the school had an inimical nature. He used to go down to the western beach in Acre where he watched the fishermen and envied them for their “liberation” from the desk and the blackboard. The big nets were interesting and attractive to him. He enjoyed listening to the songs, and watching the reflection of the red boats on the blue water of the sea. When a feast was held the smell of the cooking rose above the big hats and masts. These scenes took a large place in his work in the sixties, especially the “Blue stage”.

He used to stand outside the nightclubs offering the jasmine for the Nighthawks. With the little money, he earned he arranged a strange trip by train from Acre to Haifa. When his train arrived in Haifa he got off and stayed on the platform, waiting for the same train to take him back to Acre. During the trip he would look out for the mills.

In later works of Abdul-Al the crystal glass became a part of the color and its gradation.

At the school in Acre, his arts teacher, George Fakhouri, arranged an exhibition of Tawfiq’s paintings when he was only 9 years of age. His paintings were in watercolor and colored chalk. Among the paintings was a black woman carrying a bunch of jasmine, and whom the pupils recognized as the woman living next to the school.

From his departure in 1948 until his first exhibition of oils, (24 paintings) in Aley in 1962, Toufic Abdul-Al had passed through some hard and painful experiences. In Burja village (in Al-Shouf), he continued is hobbies with new reality and a deeper experience.
He was constantly being dismissed from school because of frequent absence. Among the woods, hills and fountains of Burja he found compensation for Ilot village. While in Tripoli he rediscovered the moods of meditation he had known on the western shore of Acre. He also exchanged selling jasmine for manufacturing and selling wheels and went into sport becoming a weight-lifter. Exile added to his rich experience and thus formed the first of its methodical features. In Burja his hobby sculpture started to take shape. He used to offer his works representing historical figures in art and literature to his school. In Tripoli he arranged a school show of pastel, carbon and water colour paintings.

4- Now where the violet did came from?

In his childhood, he was fond of the reflection of the red boats on the blue sea. It is obvious that the violet can be produced by mixing the red with the blue. And as it is said, “the colors which are mixed by the eyes have a greater effect than the one made by the mixture of the paints.” Therefore, Abdul-Al had a long personal experience with violet. From the window of his house in Acre he could see the colour violet on the surface of the sea at sunset.
But the colors in this painting and in several others are not pure and clean. At first glance, these dark colors seem lifeless, but like those of Cezanne they sometimes seem lifeless just because they are quiet, unexcitable and pale. But once one becomes familiar with these paintings and understands, one starts to see their beauty and feels happy with this unvanishing color. The color, which at first glance seems lifeless, will later seem lively and rich. It seems a clear and deliberate neglect of proportion and perspective which are, according to Cezanne results of the design, while according to Abdul-Al it is not just a result of design but also of the experimental search for new forms which preserve the three dimensions (depth – solidity – distance). Through depth as a distance effective having umbra and light, he came close to the Impressionists, and his umbras became colorful.

All the works he achieved during this stage were influenced by two contradictory misgivings which he lived through fully: Sufism and the nightwalkers. He used to run to the hill to spend some hours with his friend, father Sadir an artist and head of the monastery, who had a studio in the church which contained hundreds of paintings. Together with vintage wine they talked about philosophy, art and life. The opposite of father Sadir was Toufic Abdul-Al’s friend in Broumana School, Isam Rafi who had dozens of paintings about death, calamity and destruction, though he did not exhibit any. His personalities were a strange and terrific mummy. In this atmosphere Toufic Abdul-Al painted ‘The Cross’ in quite a few occasions like his painting ‘A funeral at down’.

Between 1956 – 1967 Toufic Abdul-Al produced apart from the watercolors, 24 oil paintings which were dominated by violet – dark blue-blue. These were given the name “The Blue Stage”.
In shade and height he presented three styles of umbra:
• Cores as a height
• Reflection of the shade of formations on the surface of water as long strokes
• The shade and light of the man running in the painting
In the space, he extended plain and wide areas, with smaller ones between which he put acute colour lines. All this was done in an obstruction of Nature, and surrealism of dreaming unrestricted formations. The Blue Stage became a field in which he planted the lightness of the colour, the flat wide plains, the ornamented spaces, the abstraction of nature and strong lineation.

7- Lineation and Sculpture
This distinction was not confirmed to the oil paintings, for what Abdul Al had achieved in lineation and sculpture was equal to what he achieved in painting. His distinctive lineation, which carries its one character, had become a new sign in the graphic art regarding scepter-which he calls an interesting game- he achieved a big progress when he introduced into it ornamentations and fed it with colours. Most outstanding of his sculpture works are Fertility – A Baghdadi – The Urn Carrier – A Girl from Bait Laham – A Girl from Ram Allah which he exhibited in Beirut and Damascus.

Online portfolio of the artist available on abdulal.com. 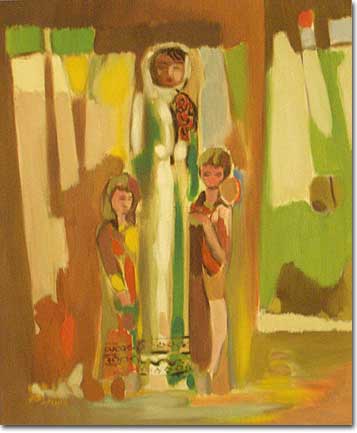 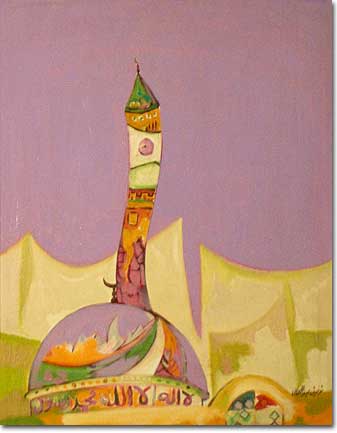 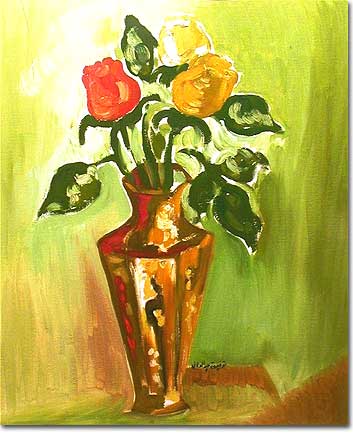 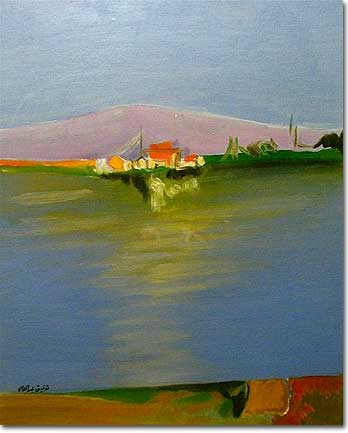