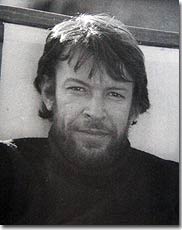 Born in Beirut, Fadi Barrage studied between 1960 and 1964 at Chicago University and at the Art Institute of Chicago. From 1964 to 1968, he was in Paris. Barrage took part in several group shows in Lebanon, France, Saudi Arabia, Tokyo (1970) and Jordan. In 1971, he participated in an exhibition held at Gallery One, Beirut and in the 'Salon des Peintres Témoins de leur Temps', Beirut (1972, 1973). In 1988, his work was represented in the Contemporary Lebanese Artists exhibition held at the Kufa Gallery in London.

The Sursock Museum paid Barrage a special tribute in their Salon of 1988-89.

The son of a cereal trader, Fadi Barrage was born in Beirut etc... etc...

Barrage's work is marked by his interest in ancient languages (Greek in particular), his fascination with literature and science, and the influence of the German painter Paul Klee. As with Klee, it is impossible to attribute any specific style or label to Barrage. He is at times very precise, almost a naturalistic, at other times flirts with Impressionism, Abstract Expressionism or even Cubism. Neither fully abstract nor figurative, he inhabits both realms; even his most indecipherable works illustrate concrete emotions and ideas. In many of his works, geometric shapes become personal symbols with intimate references; intertwining lines fuse with squares, rectangles, circles and stains; Barrage's subtle tones and earthy palette evoke mud and the sun, but also skin, lips, and flesh. He uses the same tones to paint portraits, of himself or people close to him, where a face or bust is often juxtaposed to a naked or decapitated male body. In these images constructed with quick brush stroked, the characters seem troubled, distraught, as if Barrage embodied the figure of the misunderstood visionary... etc.

Was Barrage portraying his own tragedy? At the beginning of the civil war, his Bab Edriss studio in downtown Beirut was pillaged, and hundreds of works lost. The conflict forced him to exile in Egypt, Turkey, Greece and Cyprus. Undeterred, he continued to paint, until his untimely death in 1988 after a difficult illness. During the war, he often painted his life, his immediate surroundings and his fantasies...etc. 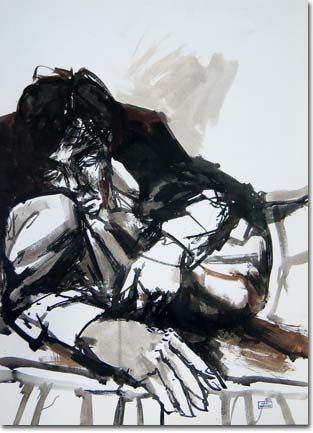 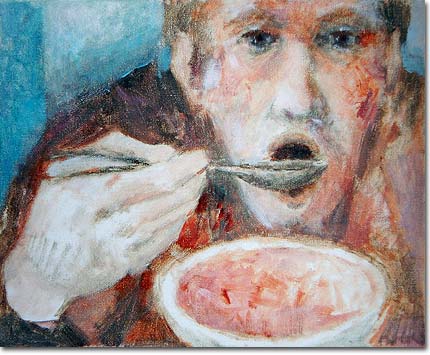