1852: Born at Ghosta - Keserwan on the 26th of June.
1852: Baptized on the 4th of July and given the Christian name of Elias.
1870: Traveled to Rome at the age of 16 to study the art of painting.
1878: Settled in Beirut and visited the neighboring countries, Syria, Egypt and Palestine.
1893: Contracted matrimony with Ms. Virignie Naaman.
1889: Participated in the Versailles Exhibition in France.
1900: Participated in the Paris Exhibition where he received the Prize of Honor of Excellence.
1930: Died on the 6th of June at the age of 78. Sculpture of Daoud Corm By the Lebanese sculptor Youssef Howayek
(Collection of the family of Charles Corm, Beirut.)

Was born to Sema'an Ya'acoub Corm in the village of Ghosta, Keserwan in 1852. He was brought up in Ghazir-Ftouh Keserwan, hometown of his mother. Since his early years, he showed an inclination towards, drawing; doors, walls, and rocks served as papers. The story goes that the Jesuit fathers saw these drawings and admired their beauty. When they learnt that their author was no other than a boy of 10, their admiration grew manifold. They met him and asked him to teach the art painting at their school, a request with which he complied on the one condition of being taught languages, mainly Italian and French.

He then started to draw on canvas, and his works were met with great success, something that led him to travel to Rome in order to pursue his studies in the art of painting. It was the year 1870 and Daoud was only sixteen years old.

Rome:
In Rome, Daoud entered the Royal Academy of Fine Arts run, at that time, by Professor Bompiani, the painter of the royal court. It happened that when Daoud took his paintings to show to Professor Bompiani at one of the aristocratic castles in Rome, the servants did not allow him to gain admittance to the place and threw his paintings on the floor. However, Bompiani suddenly came out and took a look at those scattered paintings, liked them and admitted the young painter into the circle of his students.
In both Rome and Italy, Daoud regularly visited the most famous museums and painting schools, such as the Saint Lucas School and the Luigi Atelier. He soon became famous and gained the benediction of his Holiness, the Pope Pius IX. He asked the pope to allow him to paint him for the sake of sending the portrait back home to his parents in Beirut, but the latter refused. When Daoud returned to his studio, he painted the portrait and though he did it by heart, it came out to be an exact reproduction of the Pope's traits. The pope was astonished and bestowed upon Daoud the honor of painting him face to face. The portrait turned out to be a real success.

Belgium:
Daoud moved to Belgium where he was appointed the painter of the Royal Family of Belgium at the time of Leopold II.
Beirut:
From Belgium, Daoud came back to his homeland, Beirut, and he constantly traveled to Syria, Palestine, Egypt, Iraq and Turkey to paint the eminent figures and governors there and in a great of churches.

Egypt:
In 1887, Daoud went to Alexandria and painted the portraits of the leading governors in there, such as Mukhtar Pasha the Conqueror, the accredited Ottoman commissioner in Egypt, the Emir Hassan Pasha, the Khedive Tufic I, and also those of some emirs and members of the nobility. In 1894, the Khedive Abbas II invited him to travel to Egypt in order to paint his portrait, one of Daoud's most perfect masterpieces. He also made a portrait of the famous Marquis of Reverseaux, French ambassador to Egypt.

France:
In 1889, he went to France to take part in the Versailles Exhibition. Eleven years afterwards, he participated as well in the International Paris Exhibition in which he received the prize of honor of excellence. He also received many awards and medals from many countries, among which the Cavalier Medal of Saint Gregory, The Ottoman Medal of Glory from the first degree, The Egyptian Legion, and the Lebanese Order of Merit.

His family:
Daoud married Virginie Naaman in 1892 and was blessed with four children: the writer Charles, author of many works, the most famous being, "The Inspired Mountain" which received the International Award of poetry in 1945; the painter, George, who participated in many national and international exhibitions, and finally his son, Jean, and his daughter, Marie.

His activities:
At the beginning of the 20th century, Daoud founded a modern library in Lebanon, the "Liban Papeterie aux Cèdres". He used to sell painting and drawing materials such as canvas, frames, pastel, and Charcoal.
Daoud Corm is to be considered the pioneer of the art of painting in Lebanon, for he was the first one to teach its rules and techniques, thus rendering it a science and a style and no longer the sheer innate talent it used to be. Many are those who were inspired by his art, such as his son, George, who studied under the guidance of his father, became a famous painter himself, and received many medals. Jibran Khalil Jibran is another one of his students. At the age of 15, he was taught by Daoud the art of portrait painting before pursuing his studies in Paris and Boston.

Among his other students is Khalil Saleeby and Habib Srour (According to his son in his book entitled "The Inspired Moutain", the Lebanese painter, who in his turn, transmitted his art to both Mustafa Farroukh and Kaissar El-Gemayel.
At the age of 78, Daoud Corm executed one of his most important masterpieces, the painting of Saints Sarkis and Bakhos mounting their horses. The length of his painting exceeded 6 cubits and he was unable to go up on the ladder to reach the top. He thus turned it upside down and completed it. That was a short time before his death.
This painting represents the end of Daoud's artistic mission before finally surrendering to death on June 6th, 1930. 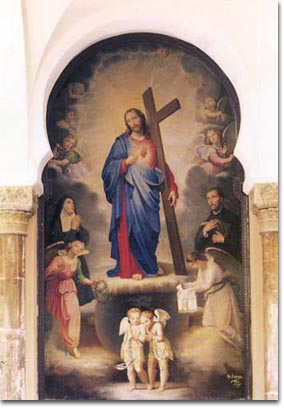 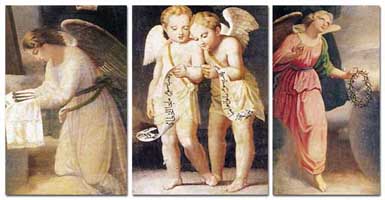 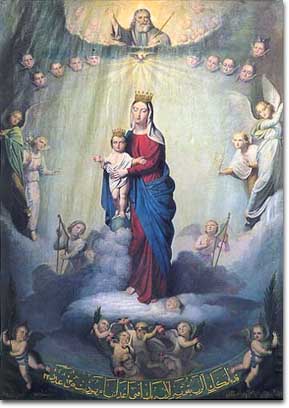 This painting turned to be one of the most awesome and fabulous paintings of Corm. It comprises 36 angels whose faces and posture completely differ one from the other 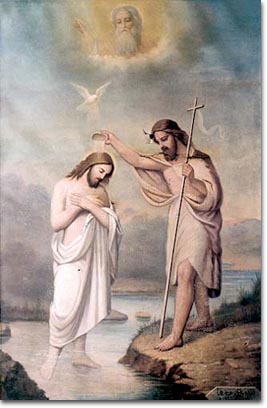 The Mourning Virgin Without a date - Oil on Canvas 70 x150cm The Church of the Chehab Emirs, Baabda. 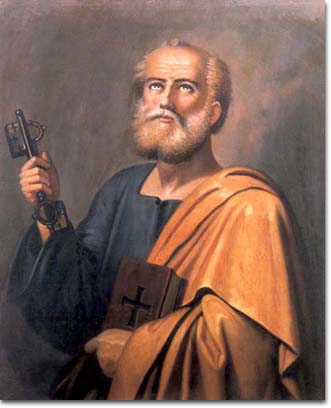 Saint Peter Without a date - Oil on canvas 60 x 73 cm Collection of the family of Charles Corm, Beirut. 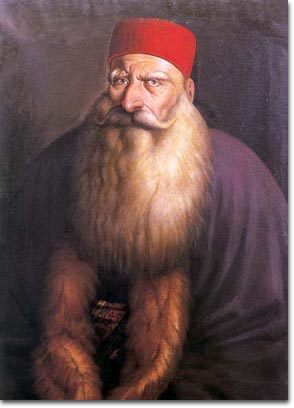 The Emir Bashir al Shehabi the Great Oil on canvas 63 x 86 cm (Collection of the family of Charles Corm, Beirut.)

The Emir Bashir was born in Ghazir in 1767 and died in Istanbul in 1850.
He mainly worked on construction projects and Beit Eddine remains one of his most important legacies in that field. The portrait was reproduced by many school books and historical references.This painting was copied from that of an Italian Painter. 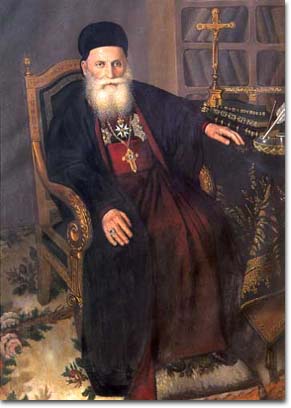 The Patriarch Boulos Massaad 1884 - Oil on canvas 112 x 150 cm The School of Saints Peter and Paul, The Waqf of the Massaad family, Ashkout Kesrwane

The patriarch Boulos Massaad was born in Ashkout in 1806 and completed his studies in Rome. He was the patriarch of the Maronites from 1854 to 1890.
He founded the famous library of Bkerki.
The body, lightly stooping forward, (like in the majority of the paintings of Corm) and the bearded face begirded by the patriarchal tiara sends to the viewer a serious, serene, and wise posture and look. The hands laid on the cushioned prop express as well the patriarchal self-discipline and dignity. 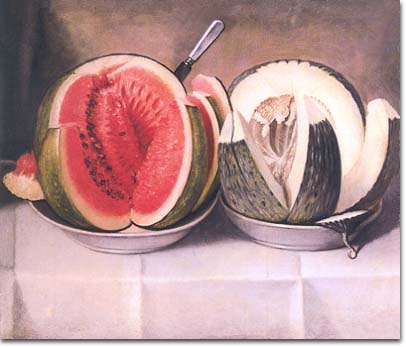 Still life - The Watermelon Without a date - Oil on canvas 60 x 73 cm (Collection of the family of Charles Corm, Beirut.) 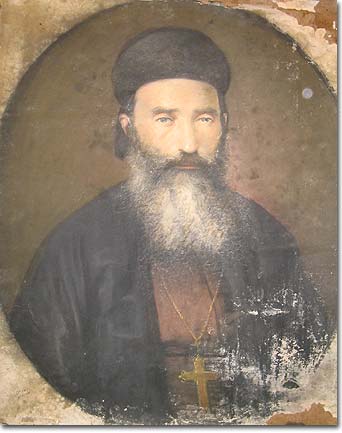