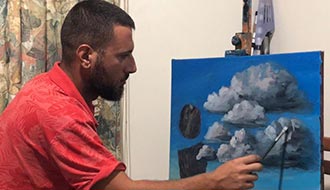 "For me, art is the sound of a bell that reminds me of my humanity. It is small hay straw that I kept to save myself and not drown in a sea full of injustice and ugliness". Majd Kurdiah is a painter and is Syrian.

Born in 1985 in Aleppo, Syria, Majd Kurdieh lives and works today in Lebanon. His childlike paintings are recognized for his use of recurring whimsical figures and for telling stories with strong morale and positive encouragement. In the past four years, Kurdieh has created a cast of characters, the Fasaeen (meaning tiny ones in Arabic), the two main ones being Fasoon, the boy, and Fasooneh, the girl. These characters are noted for their perpetual smile despite the hardships that they endure. Through his art, Kurdieh draws attention to issues that deserve to be represented truthfully. Kurdieh’s works can be found in public and private collections including the one of HE Dr. Zaki Nusseibeh’s private collection.

In a tiny two-roomed house, situated in a seaside town about 40 kilometers to the north of Beirut, Majd Kurdieh creates his art. With one room to sleep in and another for “everything else”, there is no separation between art and life. The gentle breeze brings the sounds of the Mediterranean through his window and Kurdieh, 35, tries to bring the outdoors in with him.

“I don’t specify a special area in which to create my art,” he says. “I write and paint everywhere and all the time. But I do like to sit on the chair that I use when I go fishing so that I feel like I am by the seaside when I’m painting. I have everything I need in my house; paints, brushes, my camera, my fishing rods, canvas, paper, and a huge collection of music and poetry that I store in my head. All of this is important to me when I am painting.”

Originally from Syria, Kurdieh lives alone in Amchit, a town near Byblos in Mount Lebanon. But the characters from his vivid imagination keep him company. In a distinctive and almost childlike style, Kurdieh paints narrative artworks featuring recurring whimsical figures and poetic texts that are powerful in their simplicity and have attracted fans from all over the world.

Since 2016, he has been represented by Fann A Porter, a gallery in Dubai, and this month, his third solo show opens at the Jumeirah 2 space. Kurdieh’s creations revolve around a small boy called Fasaoon and a girl, Fasaooneh. Usually joined by their animal friends, they are part of a gang called the Fasaeen (Arabic for tiny ones). He describes them as “smaller than a cherry blossom but bigger than the world. They are always smiling even if they are in tears; they do not own a house. They hate walls. They dream of a wide-open window and floating in the air.”

Sometimes their dreams are simple – such as removing the thorns from the land and replacing them with flowers –and other times, they are more idealistic. In a series in which Kurdieh painted the duo on a mission to remove sadness from the world, the artist described the problem as being as enormous as a whale. His poetic paintings show misery and destruction in the form of despondent sea mammals yet he maintains an uplifting spirit. In one moving piece, the whale showers the world with a stream of flowers from his blowhole, echoing the artist’s plaintive cry to humanity to stop all suffering on Earth.

His most recent series, which was revealed to the public on Monday, is titled Surrender to Love and shows a progression in his style. His wild and creative characters – the elephant, the donkey, the mouse, and the smiling sun – are no longer defined by surrounding black lines, somehow freeing them from any former restrictions.

Kurdieh’s poems have also evolved to more concise statements, such as “You are the insight”, “You are the memory” and “You pour light into my heart”. A particularly striking work informally subtitled Mr. Elephant Whose Heart is a Fish, depicts an elephant painted in a deep sea-green, his trunk swirling towards a turbulent center from which a white flag emerges.

In the work, Fasaooneh is firing a flower-tipped arrow into the pachyderm’s heart. The viewer is left questioning whether the act is brutal or peaceful but, when we read the accompanying poem, we realize it is love that prevails. “I drowned and my heart lives,” the elephant proclaims.

“Many of these pieces actually have a spiritual dimension, because surrender is also about submitting to a higher power and embracing the strongest human emotion: love,” Kurdieh says. Defining where his characters come from or what triggers his inspiration is challenging for him.

“Inspiration is a cantankerous cat,” he muses. “We cannot know where it will jump out from, and if we knew we would summon it at all times. All I can do is provoke it with a can of sardines, and those sardines can be numerous things: maybe a poem or a piece of music, a conversation with a friend, an act of flirtation or the view of a cloud disappearing behind the sea.”

He says he has little control over his artistic process, likening it to a conduit through which his characters’ stories emerge. “Sometimes I feel I am employed by them. They are not my property. I have tried to stop drawing them but they keep on stubbornly coming back.”

Kurdieh will not take credit for the touching poetry that is written, in Arabic, on most of his works. Although he admits to being inspired by some of the great Arabic poets, such as Mahmoud Darwish and Wallada bint Al Mustakfi, Kurdieh says he “rarely” writes the text in his work. “Most of the characters direct the dialogue and the plot, and sometimes they keep silent until I finish with the painting,” he explains.

The relationship the artist has with his work is pure and the moral values they transmit are equally honorable. His most recent work elevates his subjects into a journey of spiritual awakening, which the artist compares to Sufism.

“The love of the world means a lot to me. It is the gentle fire that keeps my heart warm in these cold times.” 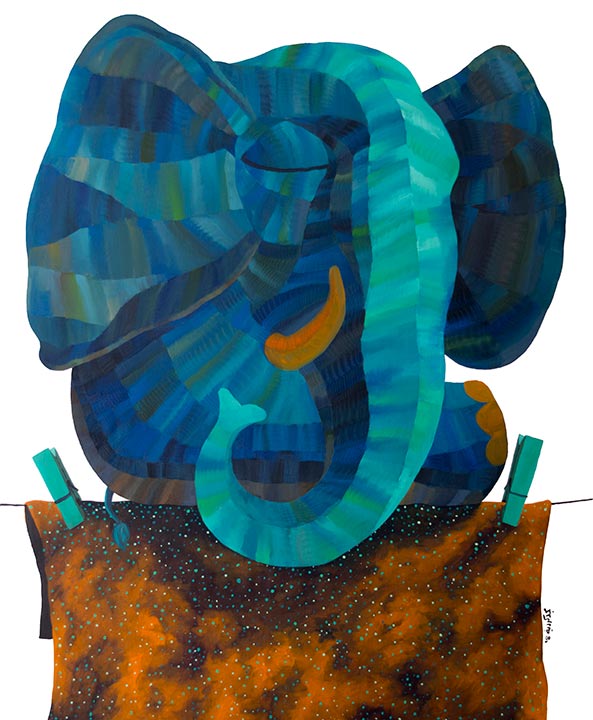 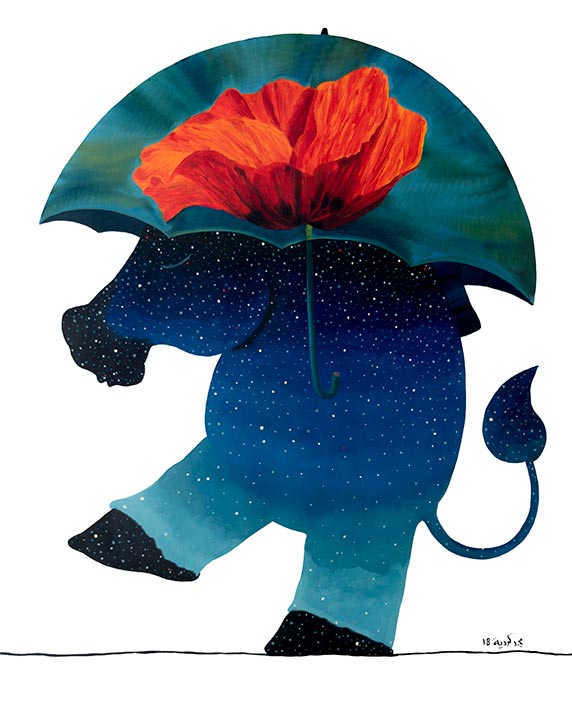 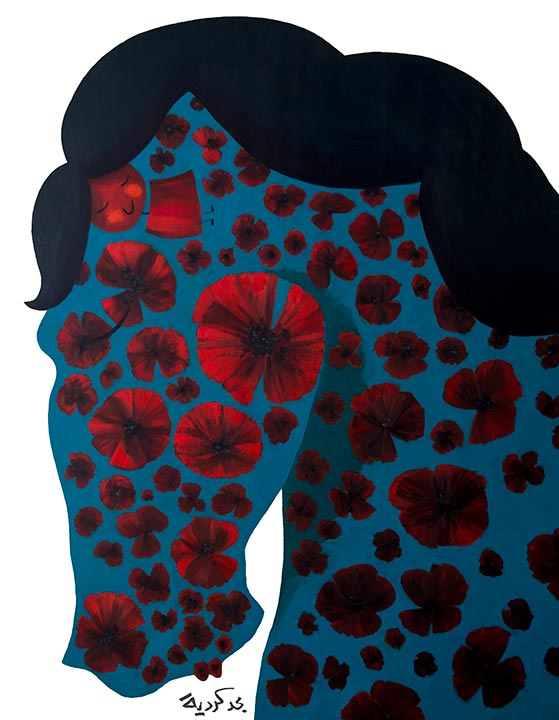 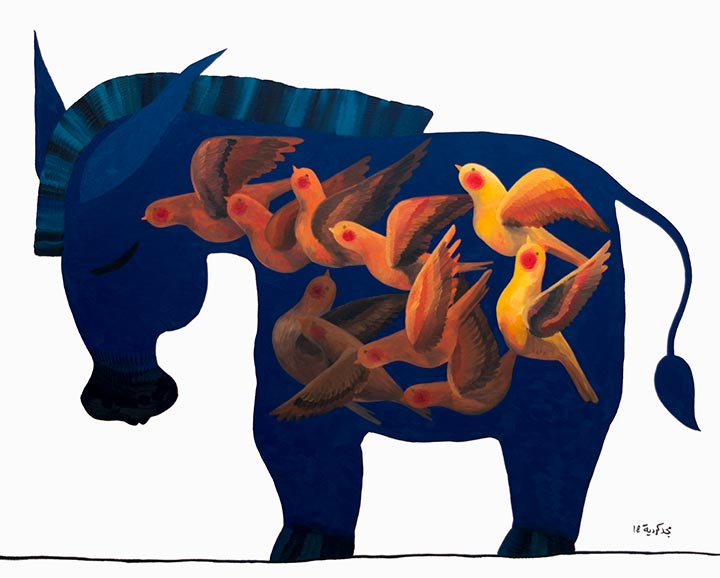 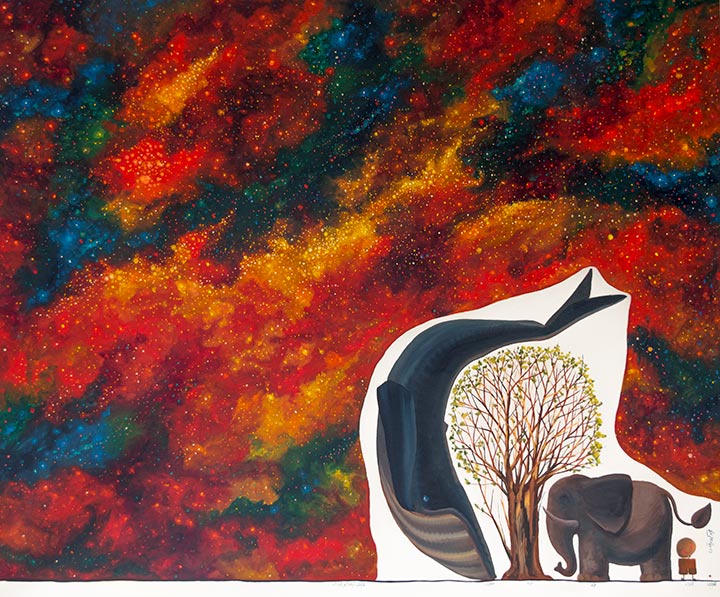 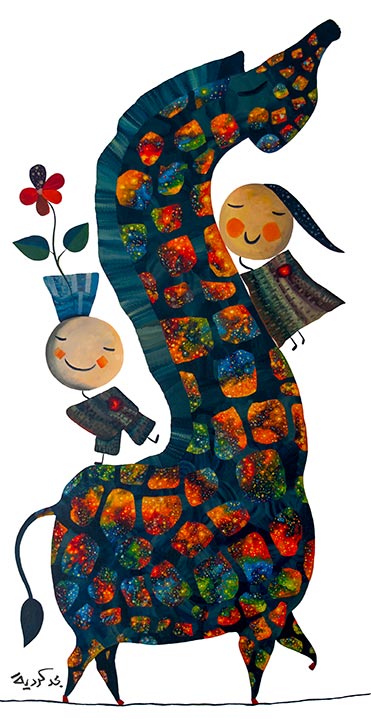 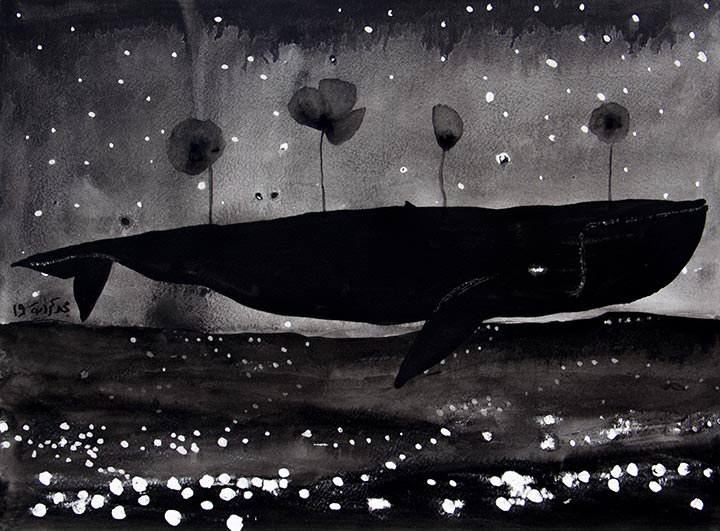 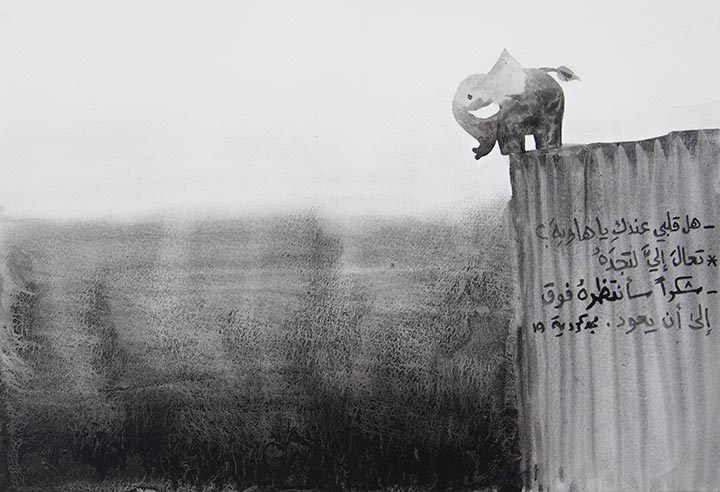 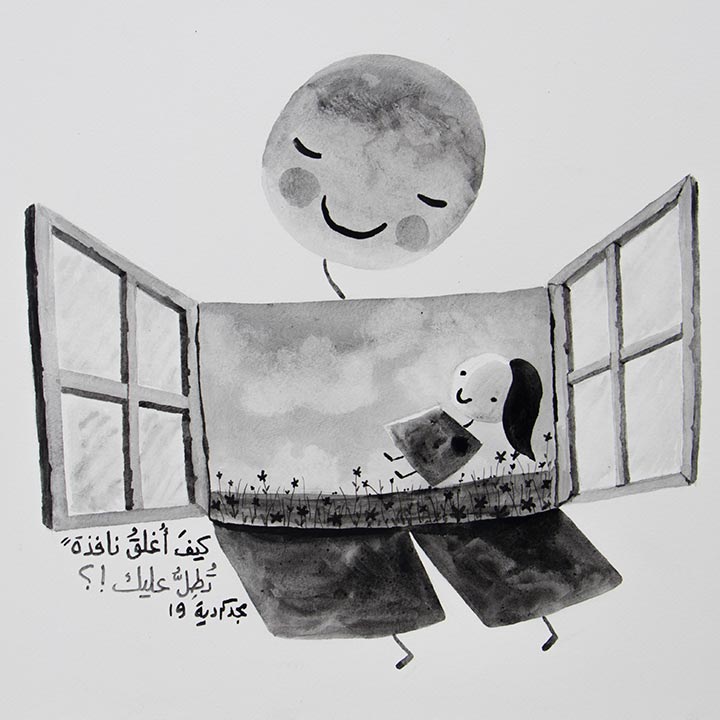