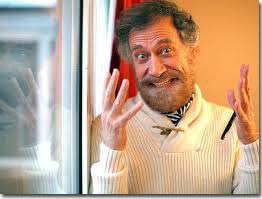 Ali Farzat, born 22 June 1951 is a renowned Syrian political cartoonist. He has published more than 15,000 caricatures between Syrian, Arab and international newspapers.

He serves as the head of the Arab Cartoonists' Association. Farzat was named one of the 100 most influential people in the world by Time magazine in 2012.

Farzat was born and raised in the city of Hama, in central Syria on 22 June 1951. His first professional drawings appeared, when he was 14, on the front pages of al-Ayyam newspaper,
shortly before it was banned by the ruling Baath Party. In 1969 he began drawing caricatures for the state-run daily, al-Thawra. He enrolled at the Faculty of Fine Arts at Damascus University in 1970, and left before graduating in 1973. In the mid-1970s he moved to another government controlled daily, Tishreen, where his cartoons appeared every day. International recognition followed in 1980 when he won the first prize at the Intergraphic International Festival in Berlin, Germany, and his drawings began to appear in the French newspaper Le Monde.

His exhibition in 1989 at the Institut du Monde Arabe in Paris, France, brought on him a death threat from Saddam Hussein, and a ban from Iraq, Jordan and Libya. The drawing that brought about the most controversy was called The General and the Decorations which showed a general handing out military decorations instead of food to a hungry Arab citizen.

Farzat's initial encounter with Syrian president Bashar al-Assad was prior to his presidency in 1996. According to Farzat, "He [Bashar] actually laughed at some of the cartoons—specifically at those targeting security personnel — he had a bunch of them with him and he turned to them and said: 'Hey, he is making fun of you. What do you think?" Afterward the two developed a friendship.

In December 2000 Farzat started publishing al-Domari ("The Lamplighter"), which was the first independent periodical in Syria since the Baath Party came to power in 1963. The newspaper was based on political satire and styled in a similar way to the French weekly Le Canard enchaîné. The first issue of the paper came out in February 2001 and the entire 50,000 copies were sold in less than four hours. In 2002 he won the prestigious Dutch Prince Claus Award for "achievement in culture and development". By 2003, however, frequent government censorship and lack of funds forced Farzat to close down al-Domari. He has been called "one of the most famous cultural figures in the Arab world".

As the ongoing Syrian uprising against the rule of al-Assad grew, Farzat had been more direct in his anti-regime cartoons, specifically targeting government figures, particularly al-Assad.

Following the fall of Tripoli in late August to anti-regime rebels seeking to topple Libyan leader Muammar al-Gaddafi, Farzat published a cartoon depicting a sweaty Bashar al-Assad clutching a briefcase running to catch a ride with Gaddafi who is anxiously driving a getaway car. Other cartoons Farzat published previously include one where al-Assad is whitewashing the shadow of large Syrian security force officer while the actual officer remains untouched with the caption reading "Lifting the emergency law" and another showing al-Assad dressed in a military uniform flexing his arm in front of a mirror. The mirror's reflection shows Assad being a dominant muscular figure contrasting with his actual slim stature.

On August 25, 2011, Farzat was reportedly pulled from his vehicle in Umayyad Square in central Damascus by masked gunmen believed to be part of the security forces and a pro-regime militia.
The men assaulted him, focusing mainly on his hands, and dumped him on the side of the airport road where passersby found him and took him to a hospital.According to one of his relatives,
the security forces notably targeted his hands with both being broken and then told Farzat it was "just a warning." His brother As'aad, however, claims Farzat was kidnapped from his home around 5am by five gunmen and then taken to the airport road after being beaten "savagely." The gunmen then warned him "not to satirize Syria's leaders." The Local Coordination Committee (LCC), an activist group representing the rebellion in Syria, stated that his briefcase and the drawings in them were confiscated by the assailants.

In response to news of Farzat's ordeal, Syrian opposition members have expressed outrage and several online activists changed their Facebook profile picture with that of a hospitalized Farzat
in solidarity with the cartoonist. The incident provoked an outpouring of solidarity by cartoonists in the Arab world and internationally. Egyptian Al Sharouk's Waleed Taher had drawn a map of the Arab world with a face emerging out of Syria screaming "They beat up Ali Farzat, World!" Egypt's Al Masry Al Youm published a cartoon depicting a man with two amputated hands,
taken aback by how another person guessed that he was a cartoonist. In the Lebanese daily Al Akhbar Nidal al-Khairy published a cartoon depicting Farzat's broken hand being stabbed by three security men smaller than the hand in size with the caption reading "The hands of the people are above their hands." Well-known Carlos Latuff of Brazil drew a rifle with a pen as its barrel pursuing a frantic al-Assad.

The United States condemned the attack calling it "targeted, brutal."According to the BBC's Arab affair's analyst, Farzat's beating is a sign that the Syrian authorities "tolerance for dissent
is touching zero." One month earlier, Ibrahim al-Qashoush, the composer of a popular anti-regime song, was found dead with his vocal cords removed.

Following the attack Farzat stated that he would not meet with al-Assad any longer, although he was not sure if al-Assad directly ordered the assault against him. Farzat said he would continue
to criticize al-Assad, stating "I was born to be a cartoonist, to oppose, to have differences with regimes that do these bad things. This is what I do."

Farzat's drawings criticized bureaucracy, corruption and hypocrisy within the government and the wealthy elite. His drawings, typically without captions, are renowned for their scathing criticism
and for depicting types rather than individuals. Through his cutting caricatures he gained the respect of many Arabs while drawing the ire of their governments. However, since the uprising in
Syria began Farzat has been more direct in his caricatures, depicting actual figures including the President of Syria, Bashar al-Assad. Ali Ferzat's satirical cartoons about Syrian politics led to a beating by militia loyal to the regime, but he has not been silenced. Laurens Cerulus meets him by Independent

Ali Ferzat is Syria's most renowned cartoonist. His work has become an iconic feature of the Syrian revolutionary movement; his cynical caricatures of Syrian President Bashar Al-Assad and
Arab dictators have mocked repression and corruption all over the Middle East, and Arab Spring street protesters have held up his work in their fight for freedom.

The cartoonist was forced to leave Syria after he was assaulted by masked gunmen on his way home from his former studio in Damascus in August last year.

Dragged from his car, driven to the city's outskirts and beaten up, government militia broke his fingers while shouting their purpose – that Mr. Ferzat would not be able to harm Assad's reputation any more.

However, now based at a new studio in Kuwait, Mr. Ferzat has not been silenced. "I saw this [attack] coming," Mr. Ferzat says, leaning across the table of a hotel lobby in Brussels.

"The cartoons I drew on the corruption and repression of the Syrian regime were the most courageous I have ever made. When I draw, it is like a voice is shouting inside of me.

At the start of the protests, I felt like I was possessed, like I wasn't in control of my own body anymore. The voice inside was stronger than ever before."

The cartoonist, now 61, has published over 15,000 drawings in Arab and international press over the decades. On his recent visit to Brussels, Mr. Ferzat was awarded the Sakharov Prize for
freedom of thought by the European Parliament, which honored him as one of the leading figures in the Arab spring.

"The revolution is a recognition of humanity, a fight for freedom and democracy," he stressed to the audience. "We don't have a party programme to distribute."

While his cartoons have mocked Assad more and more directly since the protests began in March 2011, Mr. Ferzat feels he has always been at the forefront of the struggle for freedom of expression.

"I started drawing at the age of five," he says. "I wasn't aware that I could actually draw but I felt I had a strong feeling for sarcasm. I had a sarcastic vision of things."

As part of the Syrian intellectual elite, Mr. Ferzat had been a prominent advocate for freedom of speech during the rule of Bashar al-Assad's father, Hafez al-Assad.

But when Bashar al-Assad succeeded his father as president in 2000, Mr. Ferzat said there was a brief moment of hope, dubbed the Damascus Spring, which accompanied Assad's early years in power.

In 2001 – and with Assad's encouragement – Mr. Ferzat co-founded al-Doumari ("The Lamplighter"), the first independent publication since the last had closed in 1963. "It was a time of optimism," he remembers.

In the past, Mr. Ferzat has even described "a friendship" blossoming between himself and Assad during this time, with the president even attending Mr. Ferzat's exhibits. But as al-Doumari
printed its stinging critique of government corruption and issued calls for sweeping reforms, the relationship, and Assad's enthusiasm for the magazine soured.

"All of the sudden the government rejected our critical tone and closed it down," he says. The paper was taken off the newsstands in 2003. "The group of reformists that founded al-Doumari
have fled the country or are in jail."

In 2007, Mr Ferzat foresaw that a "monumental crisis" awaited Syria if the Ba'ath party continued in its mission "to deprive other national parties of true and effective participation".

That crisis arrived last year when street protests made way for the ongoing military conflict between rebel groups and the Syrian army that has claimed more than 30,000 lives since the uprising began 19 months ago.

However, Mr Ferzat's faith in the revolution has not wavered. He believes the regime itself is weak, propped up by external powers.

"Let me ask you a question," he says, leaning closer across the table. "Who is behind the Syrian regime, you think? The regime doesn't exist anymore – it is a myth.

Today, the revolution is against outside powers: China, Russia, Iran, Hezbollah. If Assad was on his own, we would have toppled the regime in two months."

If one positive has come out of this bloody conflict, it is that the struggle against repression has reached a point of no return, he says.

"The revolution was won 18 months ago, when the wall of fear was broken down," he says. "We will never return to the state of fear and terrorism that existed up until then."

"For years, the regime has hampered opposition parties... Today, everybody is revolting. Everybody is a victim of the repression. What we see happening today is the prize we have to pay for freedom." 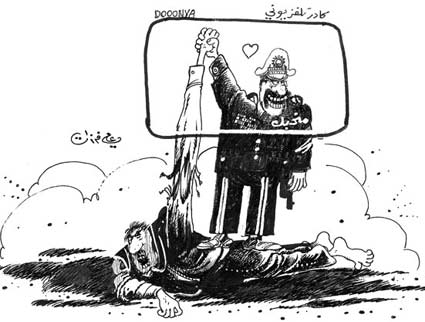 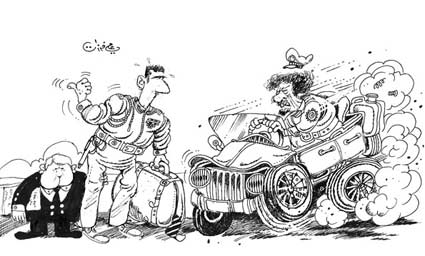 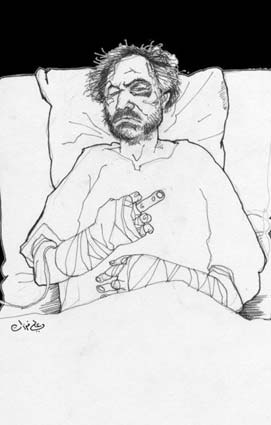 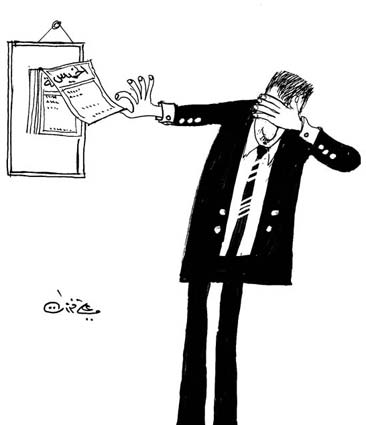 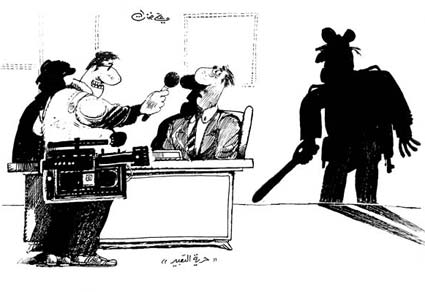 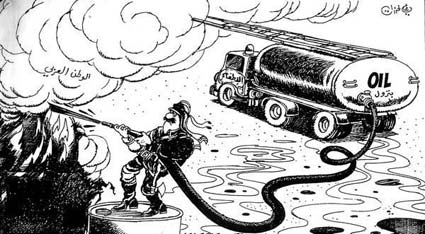 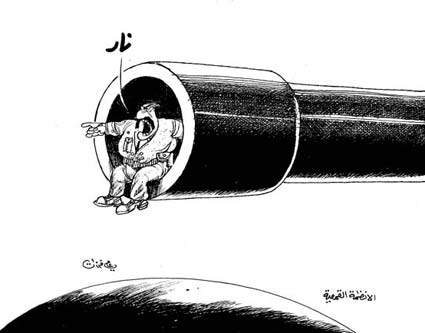 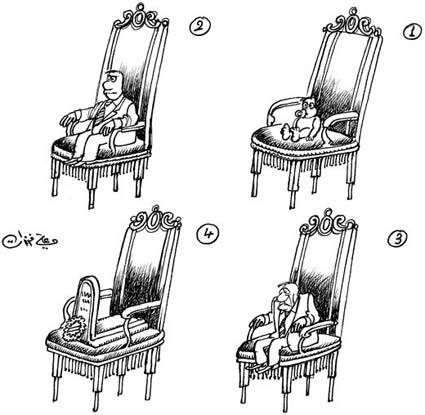 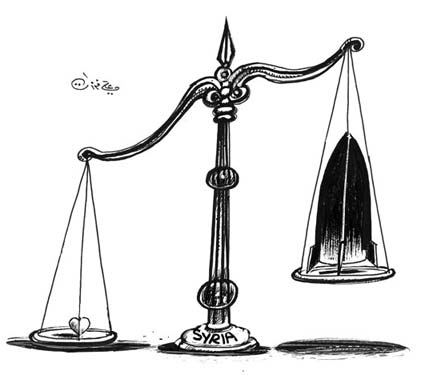 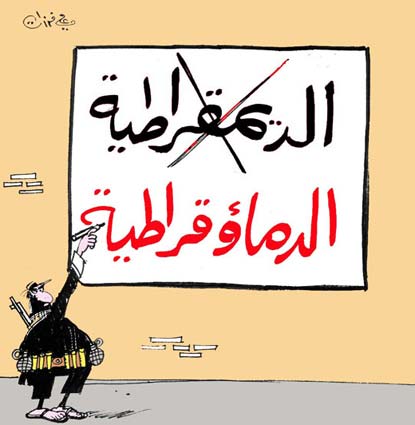 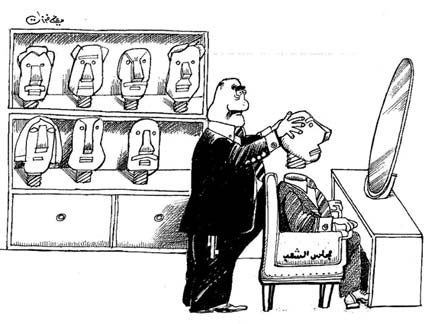 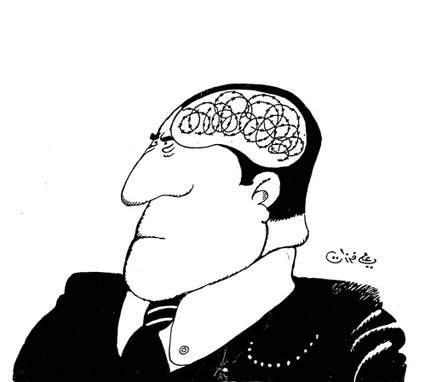 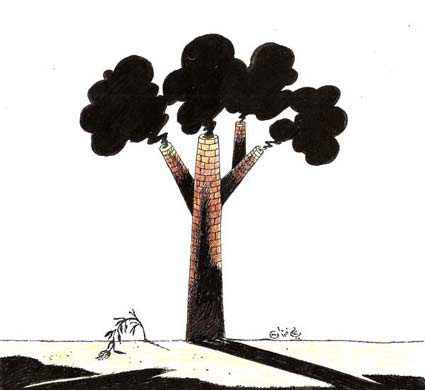 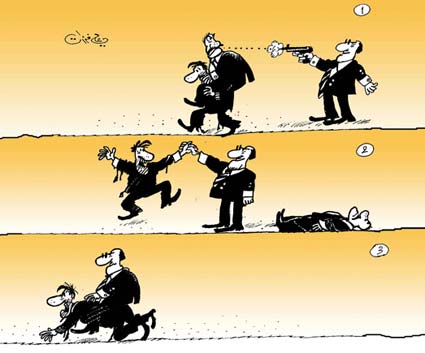 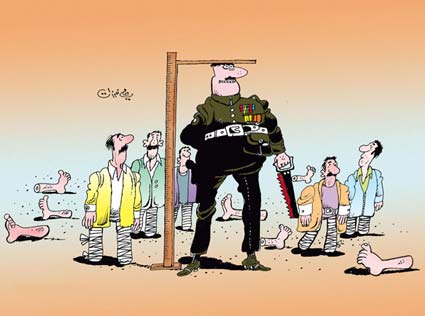