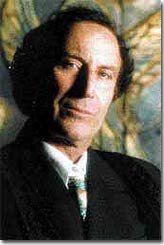 Abdel-Halim Caracalla has deep roots in the traditions of his country, particularly in those of the region of Baalbek, land of his birth. Everything he does reveals his sobriety of gesture and the sophistication of his thought. When he received our team from Magazine it was at the Caracalla Theater in Sin el-Fil, as usual with an ever uncompromising regard for all around him.

Abdel-Halim Caracalla is not one who is keen about going back over his past life to talk bout how his vocation was born and how his passion led to triumph. Far from him to recall again and again his earlier years. What are far more important in his mind are the future and the things that are yet to come and all that he has yet to create. “What is past is past. What are far more important are the now and the afterwards.” His forty-five years of artistry in his eyes are nothing more nor less than the experience which has made it possible for him to sharpen his view, his perception. At present he is concentrating on preparing his coming spectacle, The Queen of Sheba.

In the beginning was the body...

Before concerning himself with the dance, before being the choreographer that he was to become, Abdel-Halim Caracalla was an athlete. He was the Arab countries’ champion pole-vaulter, representing Lebanon in international games. Coming from Baalbek, he grew up in contact with the Baalbek International Festival, which featured many kinds of performance, ballet not the least among them. “I noticed that they (the dancers) used the body in a different way.” As a pole-vaulter, he had belief in this different style of using the body and thought that dance would be easy for him. “I tried, but it was beyond me. Then I understood that this was a different world. So I felt within me a kind of challenge. I was struck and impregnated by the beauty of the human being when he considers himself as an instrument, a medium on the stage, to the sound of music. The soul, the spirit and the body together share in the creation of a beautiful image, and above all in the splendid setting of Baalbek. This image has taken hold of my mind and is constantly before me.”

A true son of the soil of Baalbek, Abdel-Halim Caracalla is cradled in traditions, in weddings, in mountain pathways, in strangely formed rocks, in the snow and in the rain. “There are regions around Baalbek where it dawns on one what God had created,” exclaims Abdel-Halim Caracalla. When he speaks of Baalbek, his tone of voice changes, his enthusiasm takes hold and rises in crescendo, thanks to a spirit and a body ever impregnated by the land of his origin. This land of his childhood and of his adolescence has laid its seal on his imagination and his consciousness. He has crossed and re-crossed mountains ever in contact with the Nature that God has designed. Often he joined in the Bedouin weddings to which his father led him, celebrations of those Bedouins who in summer set up their tents throughout the Beqaa. The Bedouin folklore blends with that of Lebanon, influenced by the region where it takes form, its climate and the nature of the countryside. All these things were spectacles and experiences that were absorbed by the child, the adolescent and the adult before he was able to rationalize them. “A man is the child of his environment and each of its elements leaves on him his imprint.” As he says and persistently repeats, Abdel –Halim Caracalla is “the son of traditions, the son of the ‘turath’.”

But the “turath” alone is not enough, being something simply inherited to mold an identity. For a true culture there is a complementary need for education. So Abdel-Halim Caracalla went to London to study choreography with Martha Graham.

At the end of his studies, Abdel-Halim came back to Lebanon to do modern dance. “I said to myself that there must be a hundred companies of modern dance in the world, and if I do the same as they do I shall be just one among many, a mere nothing. Then I had the idea of blending the technique of Martha Graham with tradition, with the traditional movement of the body.” So he studied the technique of the “turath”. He blends, marries, the two forms, integrating whenever possible the Graham technique into the debkeh, taking the classic tradition into its artistry, “...without realizing to start with that I was doing something grand that was destined to become worldwide.” As Abdel-Halim points out, now this has become a global dance form, “globalized”.

Abdel-Halim Caracalla is so full of his passion that he seems carried away, ever living in this other world which once fascinated him as a child and still fascinates him, never leaving him, with the attraction of the body and the language of the body. He has created a language very much his own, bringing together all the techniques of the dance to begin with, while strictly preserving the Lebanese identity. But this local identity was too confining, so Abdel-Halim opened out to a general Arab identity, bringing in its folklore, its music and its costume.

The theater of Caracalla has traveled far beyond the frontiers not only of Lebanon but even of the Arab countries, to reach those of the West and to broaden the field of action of the cultures of the Lebanese and the Arabs. However, it has certainly not been easy to penetrate into the Arab world. Abdel-Halim Caracalla cannot help smiling. “Dance was completely rejected in the Arab world. When I recall our beginnings, I can hardly believe how we won through. But we managed to impose ourselves and our art and to win respect.” As for every artist, it is a case of mounting success. “It was my success that allowed me to continue.” But Caracalla refuses to fall into the snare of self-satisfaction and complacency. What he has created, what he has accomplished, he hides from others. His struggle is a personal one. “I always throw down a challenge to myself to create something new and so excel myself on each occasion. I consider this as a cultural message in the name of Lebanon and of the Arabs in general. In any case,” he adds, “without the Lebanese public I would have been unable to develop. The love of the Lebanese public has given me confidence and the moral drive necessary in order to ascend the stairway of success. To that must be added the admiration and support of the Arab countries.”

This is yet another reason for Abdel-Halim Caracalla to be confirmed in his concern to fine-hone every detail. He makes no concession. He insists. He never allows any work to pass from him which has not been studied at every level. “Any work must be always first-class.” This is why he takes care to surround himself with a solid team that is whole-heartedly dedicated to the Theater Caracalla. “There must be dictatorship in the work. Any backsliding is strictly forbidden. Anybody who cannot follow me has only to choose another direction for himself. It is only in this manner that we have been able to arrive where we are today.”

One might add that in recent years the name Caracalla seems to have been no longer the name of a person, the founder, so much as of an entity. The Theater Caracalla has become has become a cultural association, with Abdel-Halim’s two children Ivan and Alissar playing a part. The physical and spiritual beauty of Alissar is a source of inspiration for her father as he himself is only too ready to admit. However, he has not tried to influence his children or to push them into joining his Theater. He has left them free to choose the way they want to go. Ivan studied Theater and then Television and Cinema, and Alissar Choreography, both in the United States, before they made up their minds to join up with their father. Now there is close collaboration between the three artists for concept, staging and choreography, collaboration for a still better vision projected into the future.

“Ballet is a story told in the language of the body. Each ballet has its criteria, its physical expressions and its choreographic phrasing. When the dancer follows the choreography he must do it with his soul, his spirit and his body at one and the same time. He has no time for reflecting, but must straight away use his body to express himself, to express sadness or joy or anger. The soul, the spirit and the body are three elements which are the creations of God. God has created the body that the human being may continue to explore it the whole life long. The body is like both paper and pencil, for one writes with the body whatever subject one wishes every time. Here we have the infernal engine of the human body, for the choreographer uses the body, the man, as an instrument of creation.” Caracalla himself has said it.

- Art and the war: “There is no difficulty in wartime. Art has never ceased to exist. Caracalla did not stop during the war, not for a single year. I went around from one region to another. Art belongs to no one party other than the party of all that is esthetic, beautiful human, noble.”

- Lebanon: “Lebanon is one great family. It is a fact, with Christian-Muslim coexistence, with Sunnite, Shiite and Protestant. Culture brings them together, not religion. The wind of discord is directed on the Middle East in order to shatter the Arab social foundations.”

- The Lebanese: “The Lebanese is distinguished by his ambition, his reaching for perfection, his perpetual desire to excel himself. This is what makes the individual most successful. But what is regrettable is that in Lebanon, despite all its culture, there is no for example an opera house. What a shame this is! What a disgrace! There is no place here where one can put on a spectacle on a large scale!”