Watercolor painting on the Kantari district of Beirut 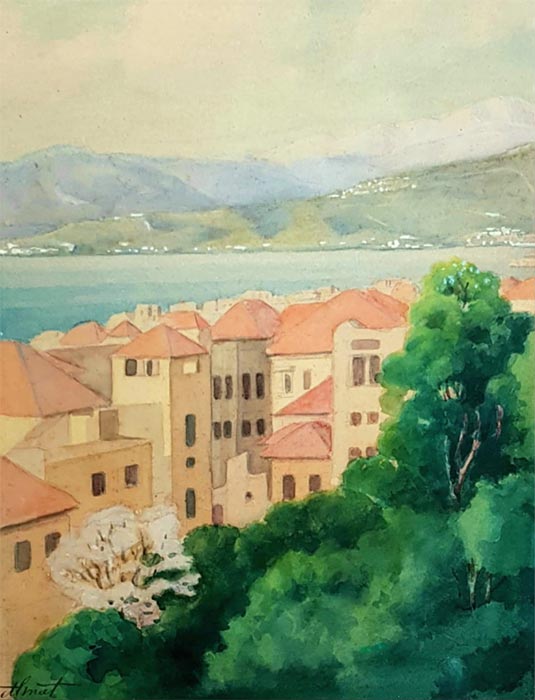 Watercolor painting on the Kantari district of Beirut of 34.5 x 27cm with a view of the northern coast and the snow-capped summit of the Sannin, painted by the Turkish painter HikmetOnat (1882-1977) of the Impressionist movement during his visit to Beirut at the beginning of the 20th century in the ottoman decline period and the beginning of the French protectorate which is characterized by the red tiles of Marseille buildings cover. Signed lower left.

Hikmet Onat is one of the great masters of the history of Turkish painting, he graduated as a naval officer in 1903, and then he worked as an officer and photographer of the navy and until 1905. He had started drawing since his childhood with white chalk and pencil and black lines on the walls and panels reflecting these feelings. He continued courses in art and calligraphy at the School of Fine Arts. In 1908 he was one of the founders of the Association of Ottoman Painters. In 1910 he obtained a scholarship to continue his studies in Paris he became a student of FernandCormon. After the start of the 1st World War, he returned to Turkey with his painter friends and exhibited some of his landscapes in GalataSarayand began working and giving painting lessons. Later He was appointed professor of the Academy of beaux-arts.....he inaugurated his first and last exhibition a few months before his death in March 1977 in Istanbul when he was over 95 years old.
The public sales side of H.Onat's paintings is in a range between 30000 and 75000euros. The market is mainly in Turkey.

This watercolor is listed in the chapter of Hikmet Onat of the Turkishpaintings.com website Ankara as: ''Precious painting, collection Elie Chedid ''.

Provenance: Acquired by Elie Chedid from the private collection of Benoit and Dr. Camille Aboussouan who was a man of letters and the former curator of  Beirut Sursock Museum.